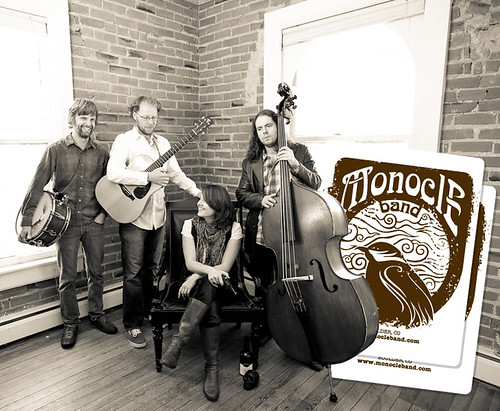 Ever get that feeling that you've been there before, but can't remember the path you took?

The Monocle Band will lead you back down that twisty mountain road. They've packed a tasty lunch. And they have a scrumptious new sticker, to boot!


Formed in late 2010 on the musically fertile slopes of Colorado’s Front Range, Monocle offers a fresh and vibrant take on the acoustic music that has made Colorado one of the most noted music scenes in the country. Monocle is Rocky Mountain Indie Folk … brand new, original music rooted in the traditions of Telluride bluegrass and the troubadour wanderings that led Townes Van Zandt through the San Juan Mountains on horseback.

You can catch them at The D-Note in Denver on June 7th, at City Star Brewing in Berthoud on June 14th, Oskar Blues Grill & Brew in Lyons on June 16th, and on KGNU in Boulder on July 22nd.

Kick back, hit the play button, and soak it up as Monica and the boys knock out Can't Get By in the front yard ...